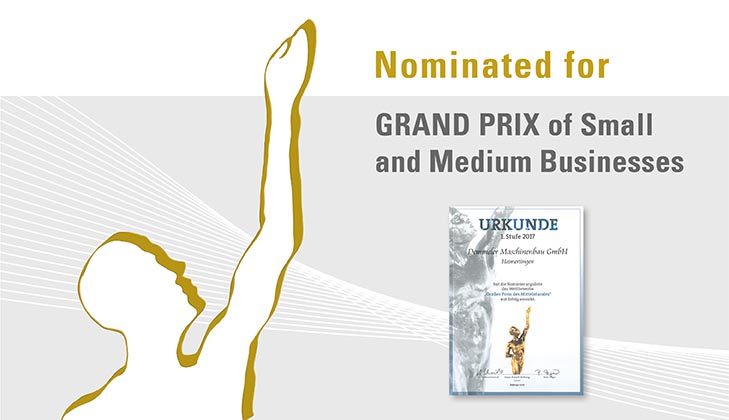 DEMMELER ranks among the “outstanding medium-sized companies“ of the economic region Bavaria, which are nominated for the “Grand Prix of Small and Medium Business” 2017. According to the motto “Healthy Medium-sized Businesses – Strong Economy – More Jobs” this year´s award of the Oskar-Patzelt-Stiftung honors companies with outstandingly economic performances. Thereby companies can only be nominated for the award by third parties. Just every 1000th enterprise in Germany made it into the nomination list.

“Those who are nominated, have already received a distinction of the first order. Simply being nominated displays the enterprise in its entirety and its role within the society as outstandingly.” so Barbara Stamm, the president of the Bavarian Parliament. The award considers not only the figures, innovations or number of jobs, but the company as a whole and its complex role in the society. The companies are judged in five competition categories: overall development of the company, the creation and/or maintenance of jobs and training opportunities, modernization and innovation, commitment to the local community as well as service, customer orientation and marketing.

The Bavarian finalists and winners of the Grand Prix of SMB will be announced on the 30th of September at the festive Awards Gala dinner at the Maritim Hotel in Würzburg.